Nurse-Ins are for EVERYONE

Often, the only outspoken lactivists are mothers who are currently nursing their children, or have nursed them in the past.  The lactivist community is strong, but insular - demonstrations are often nurse-ins, and understandably, conversation in lactivist groups tends toward the ins-and-outs of being a nursing mother.

Breastfeeding is more than a mom's issue.  It's an everybody issue.

Right now, there's a controversy spreading on Facebook, across the internet, in cafes, stores and churches.  Facebook has recently banned a number of users for posting photos of themselves breastfeeding.  They have deleted an event for a national "Nurse-In", which calls for mothers to post breastfeeding pictures.  Why?

I cannot breastfeed my son.  I'd love to post a picture of our brief nursing time, but alas, I didn't capture one at the time.  My husband can't breastfeed, my mom is way past that, and I don't have any friends who are currently breastfeeding their kids.  Nonetheless, I support nursing moms, and their right to feed their babies wherever and whenever the baby needs food.

So, why would I care?

Nursing in public prevents angry, screaming babies.  I hate listening to babies cry hysterically.  It's the worst sound in the world - give me fingernails on chalkboard any day.  Every instinct in my body drives me to find the sound of the screaming child and fix it.   Evolution or God made people that way - we react strongly to the sound of a distressed child, our hormone levels changing, anxiety activated.  When I hear a truly upset baby, all I want to do is help.  If the child is hungry, the solution is simple - feed the baby.   I'd so much rather round the aisle in Target and see a nursing mom than have to hear her child screaming across the store.

Once upon a time, I traveled a lot for business.  When you board a packed plane, there are a few things you dread having in the seat next to you.... a smelly person, an exceptionally large person, and above all else....please.... not a baby!

Well, on one trip, I approached my seat and found a mother with her 18 month old son in her lap.  It was a 4 hour flight, and I was dreading every minute.  We took off, and he started to holler - ear pressure is no fun.  His mom made eye contact with me, popped out her boob, latched him on, and smiled.  I smiled back nervously...did she just do what I think she did?   Her son looked up at me past his mom's nipple and grinned.  I was a little shocked, but there was no screaming.  We chatted on and off during the plane ride, and every time the little one got fussy, she nursed him and he relaxed.  What a pleasure!

That was my first real experience with nursing.  At 23 years old.  What, you say?  It's not a typo.  I understood that, theoretically, women could breastfeed their children, but I had never actually seen it.  For realz.

I was 23 years old the first time I saw a mother nurse her child.  My mother breastfed me for a few weeks until her doctor told her that she didn't produce enough milk and I was going to starve.  She believed him, and formula-fed me and my younger brothers from then on.  Some of my earliest memories were of bottle-feeding my youngest brother.

I have dozens of cousins, and a large, close family.  During my childhood in the 80s and 90s, either none of them breastfed their children - or if they did, they did so in secret, hidden away in the spare room with the coats.  I never saw it, not once.  My baby dolls came with bottles.  Cartoons showed babies being fed with bottles.  I was raised to believe that's how babies are fed.  With a latex nipple on a tube.

So, when it came time for me to have children, I did research - and found out that breastfeeding is not just best, it's normal - it's how babies are supposed to eat.  All the time.  Babies were made to breastfeed.  Breasts were made for making milk.  Not filling out a bikini top.  I knew it was the right thing to do....but I didn't know how to do it.

If you want to know why so many women attempt to breastfeed and fail, I would say to look there.  They didn't learn how, when they were 10 and first learning how to care for infants.  Why can't fathers support breastfeeding moms and give advice?  They never saw it, in real life or on TV.

I later found out that 2 of my aunts did breastfeed my cousins.  They did it in spare bedrooms or the bathroom, because they were told or led to believe that nursing was "indecent" and "obscene." So, at the multitude of gatherings, all I ever saw, and all that millions of American children have ever seen, was a mother either bottle-feeding or sneaking off quietly to some dark room, away from the action, to perform this "disgusting bodily function."


Here's the truth.  Babies don't come with bottles in real life.  They come with boobs.  We are mammals, and mammals breastfeed their young.  Duh. 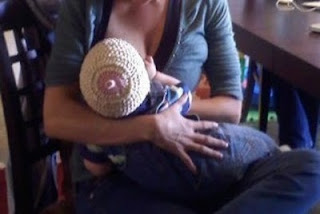 You don't ask the mother cat with kittens to "cover up" - right?

So, here I was, an expectant mommy, and I bought a nursing cover.  I'm sorry, these things are stupid.  If you're a breastfeeding dummy like me, nursing isn't "instinctual."  It's hard!  Getting the right latch is hard.  Getting the kid on the boob is a challenge at first.  Doing it blind is damn near impossible.  Yeah, yeah, some nursing covers have a hole at the top you can look down through - but their purpose is to reduce sight of breastfeeding.  Right?

Ok, let's see how a new mom, who has never actually witnessed a nursing mom do her thing (because it's gross and indecent and should be done in private only), attempt to get a proper latch with a cover.


Instructions for ensuring a proper latch:

1- The first step to a proper latch on is getting baby to open WIDE!  Brush baby's lips with your nipple to encourage him to open wide, as if yawning.
(Oh yeah, sure.  I'll see his wide-open mouth with my x-ray vision.  With a cover on, I'm going to brush her nose with my nipple, not her lips!)

2 - Once baby's mouth is open wide, quickly pull him onto the breast by pulling the baby toward you with the arm that is holding him.  Make sure you move the baby towards you, and not move yourself towards the baby.
(Sure, no problem.  I'll just hope I'm pulling him in the right direction, and try to accomplish it one-handed, so I can keep this blanket in place....)

3 - The baby's gums should completely bypass the nipple and cover approximately one inch of the areola behind the nipple.  Make sure the baby's lips are everted.  Some baby's will tighten or purse their lips, especially the lower one.  If the lower lip is inverted (turned in), try simply pressing down on baby's chin to evert the inwardly turned lip.
(Forget x-ray vision.... now I need x-ray vision and a friggin MIRROR!)

4 - Note how the baby's lips are correctly everted, and the mouth is open wide.  Also notice how much breast tissue has been taken in, almost the entire areola is in the baby's mouth.
(Hmmm... can't see that areola through the blanket, can I?)

That is mostly a "beginning" problem... what about later on?


I absolutely love this YouTube Video of an older baby's reaction to being covered...


Plus, returning to my point above, if nursing moms always cover up, little boys and girls have to learn about breastfeeding from a BOOK.

Babies are people too.  They deserve to eat when they're hungry. and they deserve to enjoy their meals without a blanket over their heads.  Pretty simple stuff.

"OMG, CAN'T YOU JUST FEED IT PUMPED MILK IN A BOTTLE??"

Sigh.  Again, a dumb idea from someone who's either never breastfed, or someone who never had problems.
First, when babies are super-little, bottle-feeding can cause "nipple confusion".  Just like it takes a mom some time to figure out how to breastfeed correctly, it takes babies some time.  Artificial nipples work differently than boobs.  They have one hole, boobs have multiple holes.  Breastmilk flows at different rates during a feeding, bottles flow at only one speed - fast!  Babies have to work at the boob.  They just have to open their mouths with a bottle.  If you introduce a bottle before a baby is fully established with breastfeeding, you can actually sabotage the breastfeeding relationship.
Not all babies will take a bottle, either.  Choice #1 - food from the source, at the right temperature, starting out light and progressing to a thick, sweet dessert as the meal progresses.  Great company, skin-to-skin contact, and just the right fit.  Choice #2, your meal all mixed up, shooting out fast, either too hot or too cold.  Sure, it's still a steak dinner with cheesecake, but you're getting it through the drive-through.
Not all moms have a strong enough supply to pump and feed their baby the old-fashioned way.  To pull this off, she has to make enough food for breakfast and lunch at the same time, but still have enough in the "fridge" for lunch later on.  Pumping's not easy, either - you don't get the same amount from a machine as you do from a baby.

Even if Mom does become a pumping pro, it can change her supply to the other side of things, with engorgement and overproduction.  If you think nursing in public is gross, just wait till she whips out the pump!
NEWS FLASH: Breast milk is not shelf-stable.  It's milk.  Hello.  It has to be refrigerated once it's been pumped out.  So, if Mom's away from a fridge for longer than a couple hours, it's the boob or nothing.   And we're back to the screaming baby.

"CAN'T YOU JUST GO IN THE BATHROOM??"
Right.
'Cause that's a nice, safe, clean and comfortable place to enjoy a meal.
Did we forget?  Babies are people, too.

So, nursing moms, keep it up. Whip it out.
Feed your babies.

Nurse in public.  In church.  At the store, in an airplane, in the playground, at the mall, at Christmas parties and birthday celebrations, in line for Santa, at a restaurant.  You're doing what's best for your baby, absolutely.

Just as important, you're showing that little girl at the next table over how to do it right.  You're teaching your nephew how to become a supportive father.  You're reducing noise pollution.  You're improving the public health.

You're saving the world, and I'm more than happy to hold your cape.