I have a new-for-me car.  It has a virgin bumper.  I've been in search of the perfect bumper sticker for about 2 months.  Not an earth-shattering decision, obviously, but something I've been on the look-out for.  I don't want to have 20 stickers on my nice, shiny car, but I would like one...just one.

I considered something silly (Do not meddle in the affairs of dragons, for you are crunchy and good with ketchup),  but I really wanted to say something important and thought-provoking.

I strongly considered an anti-circumcision bumper, but frankly, that's a really good way to start a nasty argument with most people, and I'm not sure a bumper-sticker slogan is really going to change most minds.  I drive clients around in my car, and that's not the conversation I should be having with prospective customers, as a rule of thumb.  Besides, there are so many other things that are important to me.

Breastfeeding...ok, maybe....religious tolerance, music in schools, peace, the importance of treating others with respect - how the heck do you boil all of that down to a 2" x 6" piece of plastic?  I thought about having one made that said "Babies are People Too", but I care about people of all ages, and frankly, most folks don't treat adults all that well.

Then, yesterday morning, I saw it on my neighbor's car. 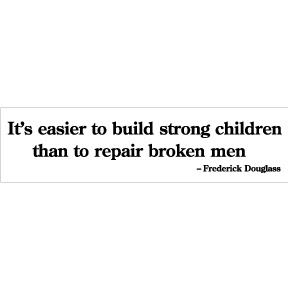 I have spent my $2 and it will be coming in shortly.  There's the crux of my parenting and societal philosophy.  Thank you, Mr. Douglass, for this small piece of your wisdom.


It is easier to support breastfeeding than pay for the health consequences of formula-feeding for the masses.  You can help a mom breastfeed her baby - so much easier than treating asthma, auto-immune conditions, obesity and the rest.

It is easier to get up multiple times in a night with a newborn than treat an adult with anxiety and depression, whose earliest memories were of being left alone when they were crying for help.

It is easier to leave a penis alone, rather than repair a penile adhesion, restore a foreskin, or treat erectile dysfunction.  It is easier to tell a child that you left the decision up to him, rather than apologize if he is not happy with your choice.

It is easier to use gentle discipline than deal with violence in an adult.

It is easier to teach tolerance to a child than reform a teenage bully.


It is easier to invest in education than in prison systems.

"Easier" does not mean easy.  None of those things are easy at the time - they're so hard that you might not be able to do them all, every time.  That's ok - we're human.  I've only been at it for 9 months, and I've already messed up on quite a few...that doesn't mean I'm going to give up trying.  Ultimately, over a lifetime and in a society, it's easier than the alternative.