And some are very, very bad.

One Fish, Two Fish, Red Fish, Blue Fish...
"Who is the bad fish in this picture?" 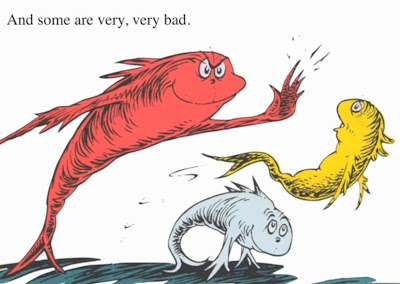 He raised an eyebrow and said, "Uh, the red one, obviously."

I always thought it was the yellow one.

My whole childhood, in the thousands of times I've read Dr. Suess's wonderful book "One Fish Two Fish", I thought the bad fish on this page were the little yellow and blue fish.  The red fish, in my child's eyes, was their father.  The yellow fish was in trouble and had been "very very bad."  The little blue fish was smug because he'd gotten away with it and his sibling was taking the blame. The red father fish was spanking the little yellow fish.

I saw this page last night through adult eyes and decided, beyond any shadow of a doubt, that our home will never be a spanking home.

I was not raised in an abusive house, by any definition.  My parents are wonderful, kind, and supportive people who I am honored to have in my life.  As I have said before, they made the best decisions they could with the information they had, and always did what they believed to be right.  So, in keeping with the times, our home was a spanking home.  We weren't spanked for minor infractions; it was rare and reserved for only the worst offenses - things that could cause us real harm, like playing with fire or messing with dangerous tools, running away from our parents in an amusement park, darting out into traffic.  Offenses that, by conventional logic, were "deserving" of a spanking. We were only spanked if we were "very, very bad."

Spankings were never doled out in anger; they were measured, explained, and followed up by a hug.  Once the spanking was over, it was over and the world continued to turn.   My parents never left marks or bruises, and, presumably, the harm of the spank was less than the potential harm of the offense.  A spank certainly hurt less than an abduction or 3rd degree burn could have.

Spanking has an interesting history in the United States, but not as far back as you'd think.  While there are ancient historical examples of young adults being physically punished by their parents, the concept of disciplining small children "by the rod" is a relatively recent phenomenon.  Ancient Jewish law in particular is very clear in its opposition to causing harm to children.  The New Testament is even more definitive. Throughout history, spanking has been reserved for adults only, as a method for removing sin and allowing penance.

Books were published about the right way to spank, and the oft-used and always misinterpreted bible verse "Spare the rod and spoil the child" was used to support spanking small children for any offense.  This verse has many, many different translations depending on the version of the Bible.  While revisiting the earliest versions, the word discipline is a more accurate translation, and the rod is more like "Thy rod and thy staff, they comfort me" than "thy rod beats me when I mess up."


Spanking is seeing a gradual decline in popularity, but a majority of Americans still believe it is an appropriate and effective form of discipline.  In a 2000 poll, 61% of parents believed that regular spanking is acceptable, even beneficial to children.  An astonishing 37% believed that spanking a child younger than 2 is acceptable.  Not surprisingly, 56% thought that a 6-month old baby can be "spoiled" by too much attention.  More than 90% of parents report that they have spanked their children. 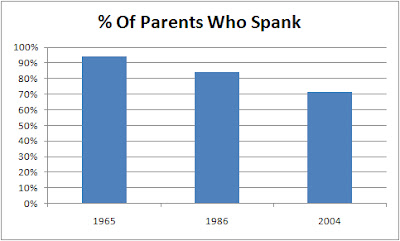 Frankly, these parents either haven't kept up with research or are ignoring it.  The American Academy of Pediatrics not only states that spanking can cause damage, they further illustrate that it doesn't work, long-term.  They are especially vocal about spanking children under 18 months of age, citing an increased of physical injury.  Children who are spanked occasionally as small children need to be spanked more and more often to "behave" as they age, and parents are left with very few disciplinary options with teens,

Another recent study by Pediatrics reported that children spanked at a young age were much more likely to be aggressive in the years following: ""The odds of a child being more aggressive at age 5 increased by 50% if he had been spanked more than twice in the month before the study began."


Spanking emotionally harms the child and the parent, and can damage an otherwise trusting relationship.  Children who are spanked are less likely to confide their troubles to a parent, for fear of reprisal.  Instead, spanked children learn to be better liars to avoid consequence.  They learn to avoid being caught, not to make good choices.

So, here is my question for you.... which fish is the bad fish?  Which fish will you be?

More importantly, when your child reads the book, which fish will they think is "very, very bad"? 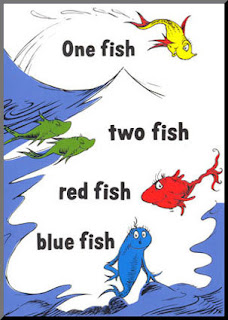